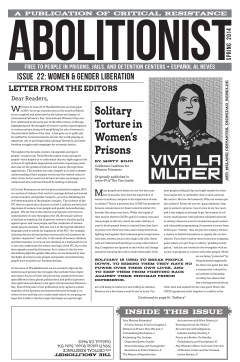 Welcome to issue 22 of the Abolitionist, our first paper of 2014. As we go to production in the month of March we are inspired and motivated by the history and legacy of International Women’s Day.  International Women’s Day was first celebrated in the early part of the 20th century in Europe, highlighting the the struggles of women’s political participation in various nations, along with amplifying the role of women in the the pitched labor battles of the time.  It has  has gone on to uplift and be uplifted by social movements all over the world, playing an important role in anti-imperialist, national liberation, and other freedom struggles and campaigns for economic justice…

At Critical Resistance we see the prison industrial complex (PIC) as a system of violence that works to manage, defend, and extend social economic, and gender inequity–as well as inhibiting the self-determination of the peoples it targets.  The violence of the PIC take on a particular character in how it  polices, surveils, and imprisons women, trans people, and gender nonconforming people.  We see this in the attacks on programs of services in communities of color throughout the US, the sexual violence of military occupation, the ubiquitous violence of police policy against queer and trans people, and the conditions of women inside prisons and jails.  We also see it in the beyond-offensive language used to justify the expansion of the PIC–for example, claiming new jail and prison construction will somehow be “gender-responsive” and cater to the needs of women, children, and their families.  In turn, we see abolition as framework for us to not only undermine the nature and  logic of the PIC, but to also expand our political horizons.  As it relates to the the ever-intensifying fight for gender liberation, we are honored by how the fights of women, trans people, and gender nonconforming people have enriched our freedom dreams.

In this issue of the Abolitionist, we are excited to dip into the historical and present day struggles that embody these important issues.  As you will see, the pieces that comprise this issue span different times, places, publications, and political projects that uplift and contribute to the spirit of International Women’s Day….

Click here to read “Prison as a Border” by Angela Y. Davis and Gina Dent! (originally published in Signs, Vol. 26 No.4)

Help us fund The Abby!

Help us to continue sending The Abolitionist to over 3,500 prisoners for free! Donate now!

Breaking Down the Prison Industrial Complex

Critical Resistance on the TL